Pre-cognition of brain breakdown and suicide...it's the same gun that Pyle blows his brains out with.  Pyles gun pointing to 7-12 and Bowman's screwdriver in the 9 spot, closing down HAL.

They are each using a tool on the numbered objects, Pyle aiming with his rifle, Bowman aiming with his screwdriver and in a similarly constructed shot, with both men coming in from the left side and an over shoulder view.


Pyle is 'pre-cognitively' (or foreshadowing) blowing his own 'logic memory center' out...on the range, as a throw back to HAL's breakdown and destruction, coupled with his own to come. 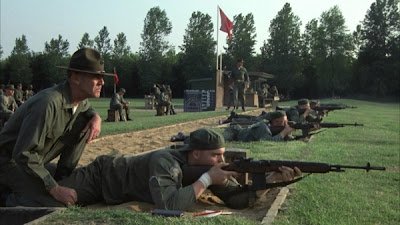 This 'firing range' scene is where Hartman compliments Pyle on his shooting..."Outstanding, Private Pyle."

note...for some reason Pyle's wrist bandage (seen above) is missing from the top shot (over the shoulder angle) and it is all the same scene...lasting 30 seconds or so.

Hartman mentions something about Pyle being 'born again hard' and Bowman will soon be getting 'born again' too...Bowman also gets a literal birth back onto the Discovery via the airlock, which plays like a birthing.

Pyle's death is immediately followed by 'the hooker scene'..."me luv you long time" for a death & rebirth touch.

I like it when Hartman says to Pyle in the 'head'...

As if Pyle is the broken AE-35 unit and/or HAL from Discovery and note that Bowman fiddles with HAL's head (brain) after his malfunction, whereas Pyle fiddles with his own....and the above quote happens in the 'head' in FMJ, then bang!

The 'supposedly' malfunctioning AE-35 unit, that after inspection leads the crew to believe that HAL is the major malfunction!

Maybe its a allusion to the fact that Pyle is now virtually a machine and a broken one at that...like HAL.  When Pyle goes into his 'drill mode' in the 'head' he comes across as an automaton like machine with his recital.

Pyle even adopts the 'cyclops' eye of HAL in this 'head' scene, one of his eyes virtually closes over. 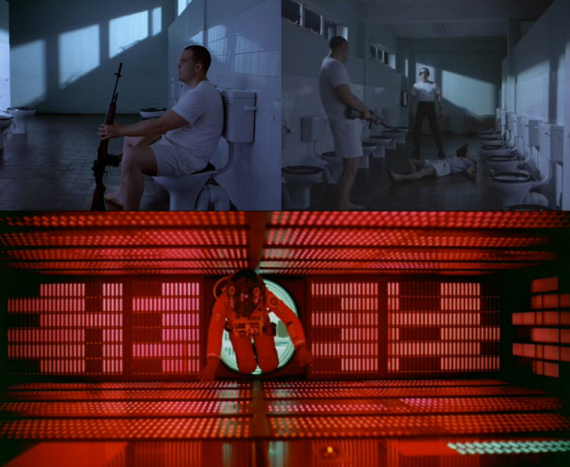 From what I understand, I think R Lee Ermey said it...on FMJ with the lighting in the 'head'...Stanley apparently spent several days just lighting it to look this way...there seems to be intent to create a similarity to HAL's brain chamber imo.


"Didn't Mommy and Daddy show you enough attention when you were a child?"


This bit fits in with what happens with HAL too, remember we're in BOTH 'heads' now, HAL's & Parris Island barracks 'head' ..Hal gets his memory center plundered and then regresses to a child like state 'Dasiy, daisy...' Pyle acts childish in parts of his scene. It works like a double reference...and both brains (Hal & Pyle) end up getting destroyed too.  Both parties commit murder before they get closed down and exit by differing methods, but the result is the same...brain death!

2 'Heads' are better than 1...screwed up 'childlike' brains, in the process of destruction.

Pyle could be singing 'Charlene, charlene...' the name of his rifle, instead of Daisy.


Receptacle Made for Number 2.

Charlene, Charlene...give me your answer do,
I've gone crazy and I'm totally in love with you,
I look like a stylish savage,
And I'm gonna create some carnage,
But we'll look sweet, upon the seat,
of a receptacle made for number 2.

Well...he is 'in a world of shit' and I like the deliberate pun of that phrase, considering his location!
And talking of 'shit' that is the term used by troops when they are in combat...'in the shit'.

Don't forget they are 'married' to their rifles now and Pyle has been talking to his one, Charlene!!!
HAL's 'Bicycle Built For Two' song...is about a marriage proposal.

Hartman:  You're married to this piece, this weapon of iron & wood! And you will be faithful.

The 'Head' as a double construct. 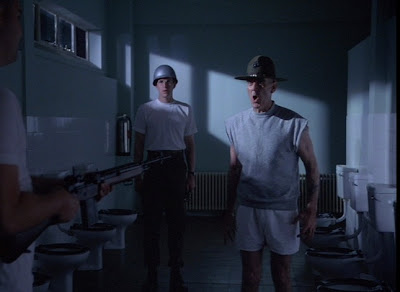 Hartman: ‘What are you animals doing inside my head?!’

(They're certainly animals, Kubrick has their heads shaved with 'animal clippers' at the start to labour this point and they are given fake names, to assist in the destruction of the old self.)

A pun & double consruct...'head' mentally and in the 'place' sense.

Maybe we can read 'the head' as in one aspect being Joker's 'head'...for he is the one who enters 'the head' and perhaps, its his own head (psyche) we're/he's going into.

Pyle may be an avatar for his humanity, that is being destroyed by the process of dehumanization...led by Hartman.  This happens on the last day/night of training, they are now marines and this is the last scene from that whole first section of the film.   The head scene therefore depicts Joker's complete transformation (via Pyle symbolically killing the cause, Hartman) from human to killing machine.

Joker's head (as Pyle says) is full of SHIT...as a result of the dehunanizing process.


Joker even uses this term at the close of the film during his monologue...

Then comes the child-like 'Mickey Mouse' chant, perhaps echoing back to Pyle?
I find it interesting that Joker uses that term...like Pyle did and it can only add to the idea that Pyle was a construct of his (psyche) innocence & femininity etc.

Joker & Pyle are inextricably linked during the film and we even see Joker literally 'mothering' Pyle in several scenes...Pyle behaves like a child (as I mentioned earlier with the reference to Hal regressing) and Joker attends to his needs, making the bed, adjusting his clothes etc, like a mother would...so Pyle is Joker's 'humanity' and 'feminity' which must be destroyed to create a killing machine.  Hartman calls them 'ladies' from the outset and this aspect must be eliminated.

The beating of Pyle scene may also be symbolic of this dehumanizing process...the scene is bathed in the same kind of light and atmospherics that we see in the 'head' shooting incident and both occur at night (sleep).  When the beating stops Cowboy says to Pyle... 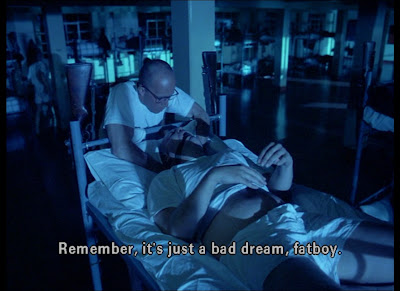 Joker is the one individual who seemingly has increased anger towards Pyle during the beating, he hits him about 6 times or so...he is beating himself up...literally, psychologically, symbolically and internally, with the help of Hartman...re-programming.  I think this is really why we see Joker like this in the next shot. 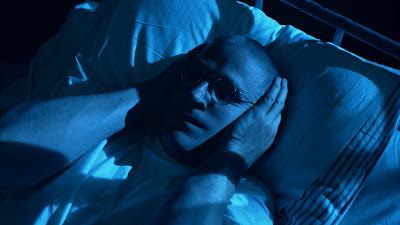 It's all inside my own head!!!


My innocence, my humanity and my femininity, have and are being destroyed...