I've lost ALL the 'draft' post for the upcoming Twin Peaks article...this hopeless Google blogger interface has destroyed all my hard work and (somehow) overwritten the piece, with my recent 'preview' post! 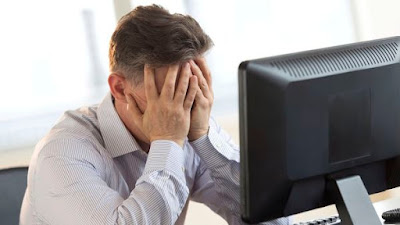 Sorry guys, but that is it....2-3 weeks of intensive work gone and in an instant, no way of recovery.

It seems that this is not a unique issue and I've found dozens of other folk who have experienced the same type of 'draft overwrite' (through no fault of their own).

The 'draft' post(s) are/were inside the yellow box, yet when the title (via a bug) gets overwritten with the 'Coming soon...' post title,  the 'Twin Peaks - Eraserhead - Muholland Drive" post, no longer exists, because it has been overwritten!  I never even typed in the 'title' (which you'd expect to have to do, to make a new post!) for the duplicate post, it just appears as a result of the glitch.

Here's a user who had this problem...'two posts with the same name' and the important work gone!

Another here...two posts the same, a duplicate and the important work gone!

So much for Google, being at the cutting edge of tech, they can't even deal with and fix a simple glitch like this!

I'm out...sorry, but I cannot justify spending weeks doing this kind of thing, only to see it disappear in a flash and not from my own incompetence!  The post was going to be an absolute monster (it was almost finished) some of the best stuff that I've done...and that only makes things worse.

Hudson (Paxton) sums it up beautifully...

Yes, this is me, officially 'bowing out' of blogging.
I won't be coming back, after this recent disaster and I'm sure (and hope) that you'll understand.

Thanks for all your support and best wishes to everyone.

Oh the irony...I only wrote the following comment (below) a few weeks ago...recalling what happened with my Mulholland Drive post from 2012.  The same thing happened there...all my work getting overwritten and I ended up rewriting it from scratch! 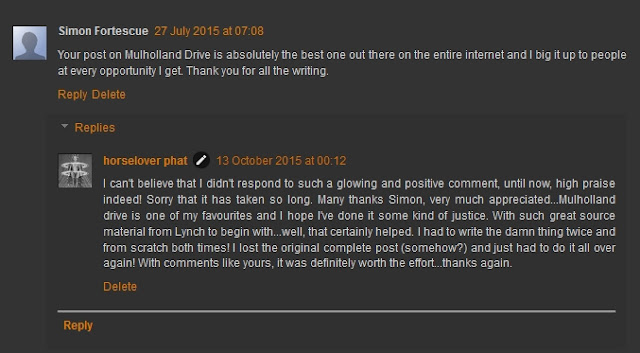 Now I've been hit twice...and both 'coincidentally' with Lynch pieces!

Believe me, it was no mean feat rewriting, just look at how long and extensive my Mulholland Drive post is...it was a monumental task, having to get over the disappointment and then rewriting it again and all from scratch!  This upcoming Twin Peaks post, was even longer and more extensive than the MD one...that is why I am hurting so much.


I probably put in 60/70+ hours of work into that upcoming Twin Peaks post, maybe even more?
Yes, 'hindsight' now kicks my ass (and hard) about backing up the data, but I didn't and everything seemed fine with blogger etc.  I'd always thought the mishap with writing Mulholland Drive (post) was just a 'one off'.

Posted by Horselover Phat at 15:51