Nothing major, an 'ass on a plate' handing over exercise, in respect of Icke.

Just to give any Icke fans the low-down on this cretinous conman (who is still obviously a BBC asset) and coinciding with the recent knowledge that Icke (and team) have closed/disabled my Forum Account and for no particular reason! I think it might have been the comments that I was making about Mr (Fraud) Icke, and his erroneous claims of plagiarism that he made against me a few years ago!

That's me 'theroach'...locked-out/disabled, no warnings no mails just locked-out. It's not due to inactivity because I had logged in with no problem only a few weeks prior.

Example. I lurked from about 2003 onwards and joined the Forum in 2007, I was posting/commenting for years.

Voxfux 2002, just so you know my history, I've been like this for 15+ years, I'm not and have never been a bandwagon rider and/or troll.

I was writing like this before many were even online, full-stop!!! TheRoach was my original tag.
You know what I mean, back in those days when folk like me were considered to be totally crazy! lol.

I was posting like this before Icke's forum was even launched! Lol. 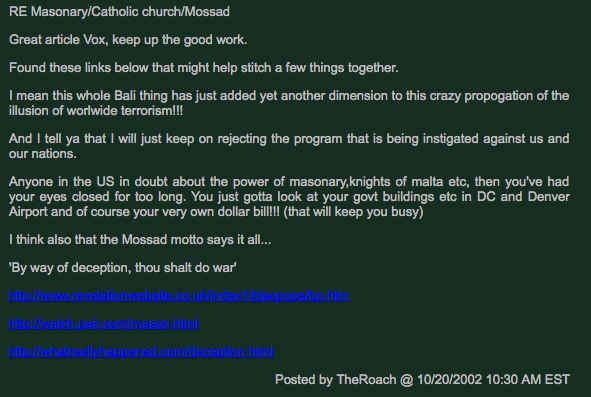 Amazing what I've found going back 14 years or so. I didn't think this stuff was still out there! :)

Here is my Icke Forum post attempting to get to the bottom of the plagiarism and troll claims! 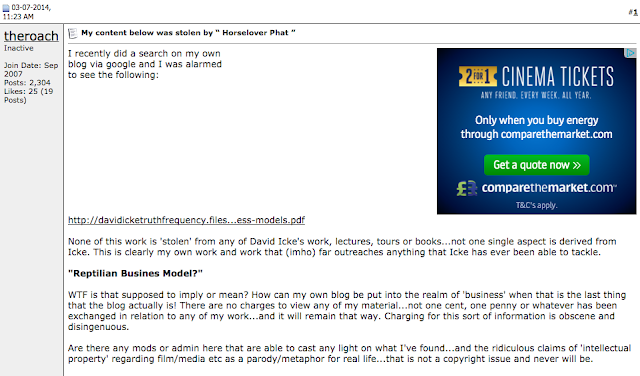 The only proof you need, is that no Icke linked response ever materialised, no admin response, nothing!

Now, what could the above possibly mean, hmmm? Let me explain. It means that Icke's entire 'reptilian theory' is nothing but a model for selling bullshit to gullible people, hence business models! He thinks that he can somehow copyright the idea or something, as if it's his original theory, not one stolen directly from popular culture! Not just that, by associating everything with his reptilian schtick, he ensures that any real research into the elite and their crimes, is summarily dismissed as being crackpot! That's Icke torn to shreds and in mere seconds. His whole 'reptilian theory' is nothing but a badly rehashed version of Clarke's Childhood's End and/or V: The Visitors, yes nothing but a total rip-off of both those pieces. The cunt has literally made an entire career on the back of this obvious theft, yet he has the nerve to accuse me of plagiarism. You can't make it up, but Icke, clearly has been!

I got labelled a forum 'Troll' right out of the blue, from nowhere, no idea why? I had never been accused of 'trolling' on his forum in the extensive time that I had posted there!?

You see folks, Icke (and his lackeys) thinks he knows that I stole his content (which I didn't, I've never bought or read any of his fraudulent books or wares, which therefore, makes plagiarism impossible!), whereas I DEFINITELY KNOW WHERE HE SOURCED HIS REPTILIAN THEORY FROM!

Someone from Clarke's estate should sue Icke for complete and total intellectual theft! 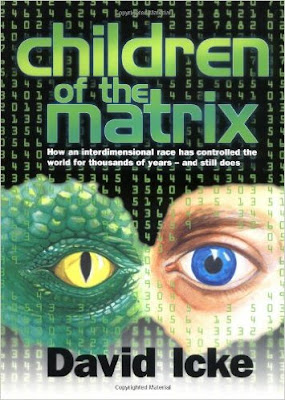 "I've got you bang to rights" - eh Dave. I wonder where he got this idea from? Wink, wink! :)
It even has 'Child' in the title and the stolen 'reptilian eye' image from Clarke's 70's work, lol.

FFS! It is this goddamn simple! The whole 'reptile/demonic alien' thing (from Clarke's novel and the series V) is simply just a childish veil (or type of euphemism) for the actual 'elite' and their activities. It's sold as fiction, but it actually operates as a form of real subversive literature/TV. That's it in the condensed and simplified form! Icke has plagiarised the concept and wrapped it up as some sort of bullshit cocktail, one with which to fleece the fans!

Clarke and the BBC

Icke's rip-off career was based on Clarke's Childhood's End, published a few years later in 1953. The BBC may have rejected The Sentinel (in the overt sense), but this is likely for public consumption purposes only. The Sentinel was literally the entire basis for Clarke/Kubrick's 2001, regardless of what official claims might state. The Sentinel/2001 piece would ultimately became the model for cinematic Sci-Fi, the 2001 (film) is symbolically linked to 9/11 via the ground zero monolith hotel. Soon after (The Sentinel), Clarke would start his fully fledged writing career. The 'paedo' BBC and 'paedo' Clarke! Ten Story Fantasy or a 110 Storey Reality? Crazy you say? Clarke references a Sept 11th date and a explosion which sinks Venice (made up of islands), in the opening of his Rendezvous With Rama (1973). WTC Manhattan also being an 'island'.

Ah yes, 'prior collapse knowledge' and mass programmers aka the BBC and via 9/11. 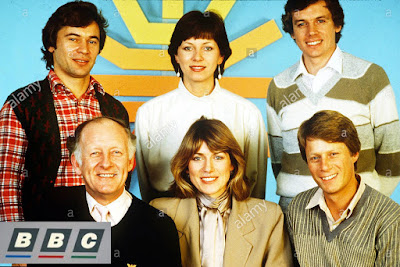 Once you're a BBC asset, you're ALWAYS a BBC asset! Icke, NEVER ONCE cited Savile in his printed works prior to Savile's death, not once. George Bush Snr, Ted Heath...yes, but nothing about Savile and rampant BBC paedophilia. Icke was at the BBC for 8 years and likely during (part of) the height of Savile's reign. Do sane people actually buy into this bullshit of his? Probably!

Anyway Icke, the 'powers that be' don't let real researchers have Wemb-ley as a platform, which is why Icke is allowed to perform there and is able to remove sums of money from good people. So-called system enemies are allowed to utilise the systems stadia and in respect of bringing the elite system down? Pull the other one Icke! He is an elite gatekeeper and a CUNT of the highest order. In claiming to help humanity against this said elite, it actually makes him a worse kind of offender than the elite themselves!!! 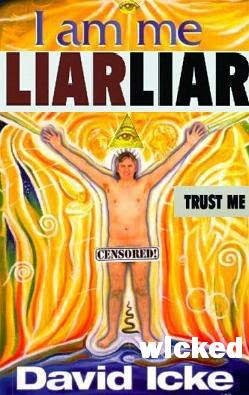 "I am a BBC owned/controlled gatekeeper - Freemason" 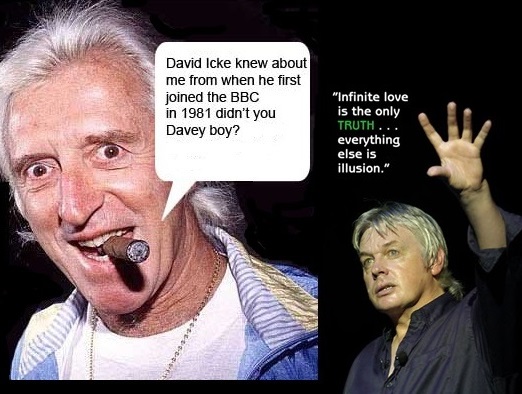 The horrific state-sanctioned abuse of children, many likely via his ex-employer the BBC (although you never leave Intel, right folks?), is a form of illusion! It's just 'the matrix' eh Dave? It's not even real, love will save the day and make it all magically vanish. This new age BS is embarrassing to witness and behold!

YOU ARE A FRAUD AND A CONMAN AND ARE GULITY AS CHARGED! 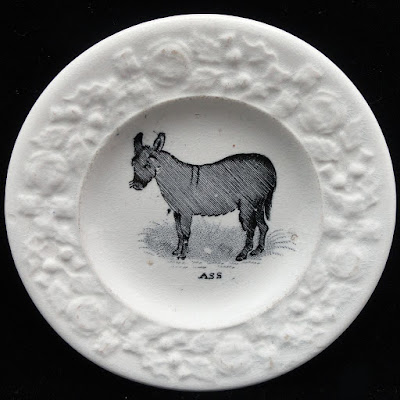 Enjoy your prize Dave, hope you like it. You can use it when you're in-between counting your ill-gotten money! :)

I challenge anyone and everyone to prove me wrong about so-called 'truther' Icke, you're welcome to give it your best shot!

Posted by Horselover Phat at 17:07