Update
What happened with the Good Cooper/Black Lodge Cooper switch?

I've put this together to make what happened easier to understand. Even I got confused as to what was happening with the switched multiple Coopers. Confused until I caught Eps. 4 and the reveal that Cooper was "tricked" - which confirmed my suspicions that there was "something wrong" - when he left the lodge. 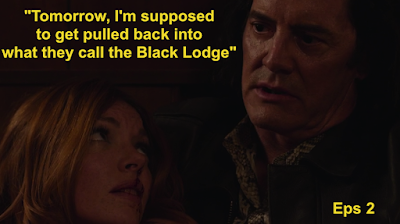 He says to Darya:"But I'm not going back there (Black Lodge)...I've got a plan for that one."

Black Lodge Cooper's plan was to use Dougie/Duggie to "replace" him in the switch. 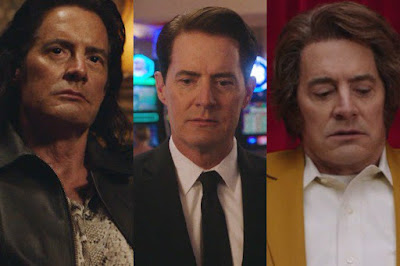 This is what actually happens. Instead of Black Lodge Cooper being sent back during the "2:53" "switch" -
it was Dougie/Duggie (Dugpa). It's possible that Black Lodge Cooper had a role in "creating" Dougie.
Somehow a 3rd version of Cooper was created and exists in the real world. 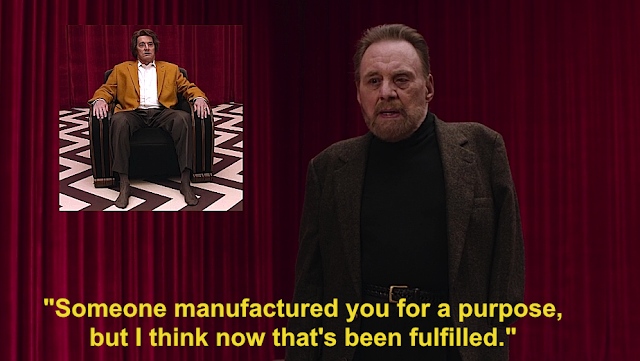 One-armed man mentions to Dougie that he was created for a purpose, one which is now fulfilled. When Dougie goes to the lodge he has one of the owl cave rings on his hand, another indicator that he is tied to Black Lodge. Notice Dougie's missing shoes, just like the shoes that Good Coop lost when he went thru the portal - it's they that have traded and switched.

When Good Cooper came thru, a "sniper hit" was arranged to take him out (in the car with Jade), one very likely tied to and arranged by Evil Coop/Black Lodge.

This was (perhaps) Evil Coop's chance to destroy Good Coop - there are problems if both entities exist in the real world. This is likely why Evil Coop arranges the "hit'. If not, then the two hit men (sniper/bomber) are working against Dougie for a purpose yet to be revealed.

Next we see Good Cooper sent through the lodge floor into "non-exist-ent" (non-existence) and into his "abyss" fall.

A fall that first sees him (briefly) go via the (likely Black Lodge linked) New York box.
What then follows is his electric portal travel back to the real world. 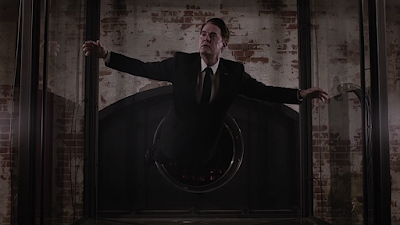 In Eps 4 - Jackpots Coop is told by one-armed man that he has been "tricked". 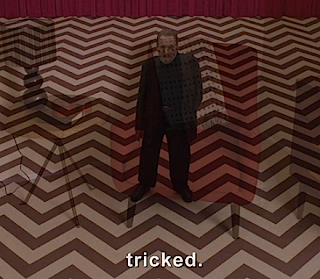 He also says that one of "them" must die - perhaps inferring either Good Coop or Evil Coop. 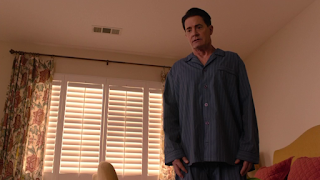 With Good Cooper being sent out of the lodge in a twisted way (under the influence of Black Lodge) and ultimately switching with Dougie (and not Black Lodge Cooper) - he is just a "shell" of his former self. A huge aspect is missing. He really is in the realms of "non-existence" - as we're seeing with Mr Jackpots Coop.

This might be where Hawk comes in. Eps 4 - Sheriff Truman tells Hawk that the Log Lady has information. 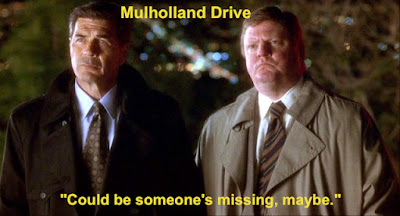 Note, Forster in Mulholland Drive (above) - where he says "someone's missing".
Truman (Forster) says that "something is missing" relating to Cooper, and that it is only Hawk, via his heritage that can help find it. Hawk mentioned that he had to find a missing 'something' in Eps 3. 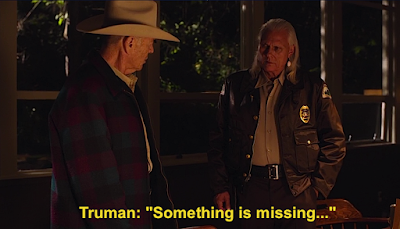 Hawk mentioned that his tribe/people knew of the "dweller on the threshold" - an aspect of the shadow self. 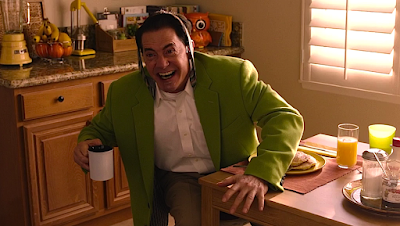 The "something missing" is literally and poetically "someone/somebody" - which is likely why
(Mulholland Drive/Twin Peaks) Truman/Forster is the one that delivers this info.

It was Hawk (in league with the Log Lady) who sensed that the Grove portal would be opening.
If Good Cooper had been switched properly, Hawk would've met him outside the Grove.
(thanks go to Ginds at Reddit) 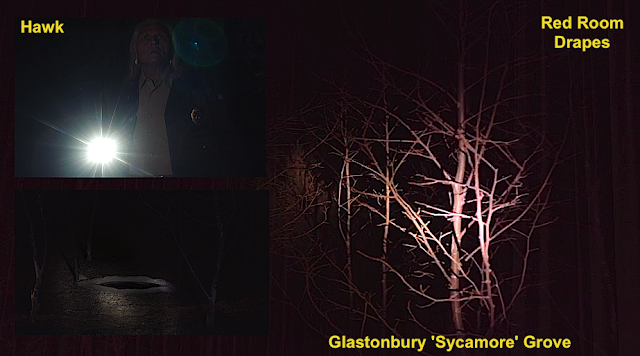 Good Cooper should've probably left in the same way that he went in - via the sycamores.

Black Lodge Cooper - the car crash could've been something he was expecting to happen.
He was certainly expecting the lodge switch to occur, hence his plan to line-up Dougie to replace him.
I previously mentioned the car's symbolic link to the Black Lodge convenience store. 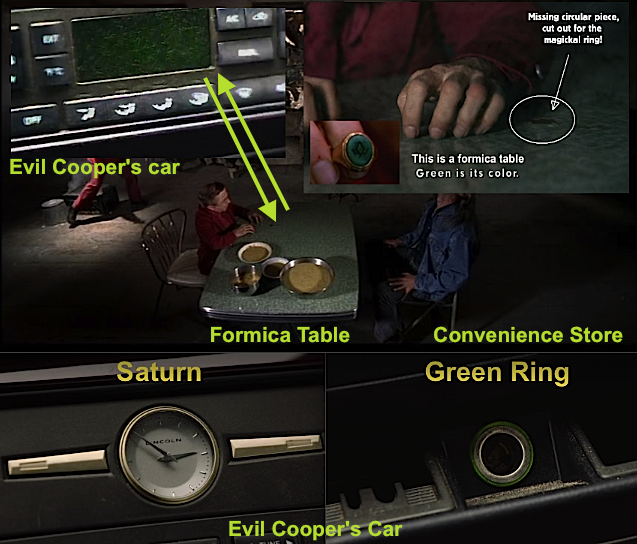 There are airflow seating position under the car's green display on the dash, like at the green table.
Evil Cooper is sick (or vomits) and expels what looks to be garmonbozia, as seen on the table.

Talking of the car and sick - how about this for an amusing and brilliantly constructed echo? 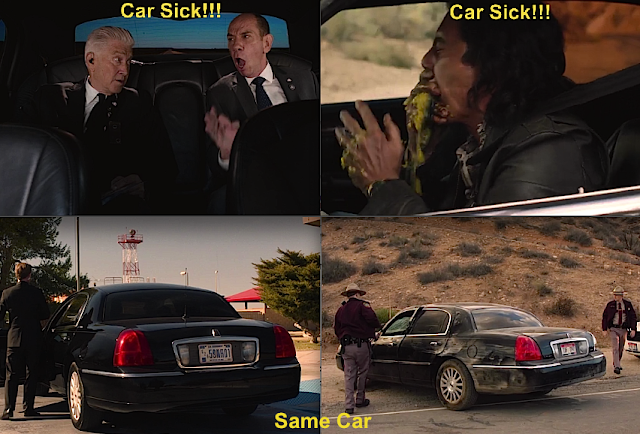 Car Sick x2 - same make, model and colour. FBI car even brakes and swerves (like Evil Coop's) when Albert yells out.
They're on their way to visit 'car sick' Evil Coop, too. This might have more significance going-forward, who knows?

I think we have to start realising that Black Lodge Cooper is a criminal genius - perhaps in the Windom Earle mould.

The drugs and machine gun (in the back of his crashed car) ensure that he is arrested and sent to Yankton Prison (the prison where he earlier downloaded the plans/codes for). 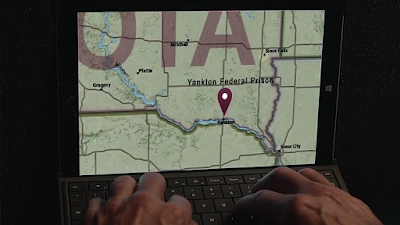 This is very likely the exact same prison where Ray is now incarcerated. It is Ray that double-crossed him along with Darya, they planned a hit on Evil Cooper, and apparently at the behest of Phillip Jeffries. Evil Coop and Good Coop have both been under the threat of being "hit". 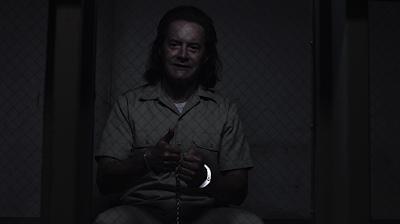 There is also seemingly "something wrong" with the jailed Evil Cooper - his demeanour when Cole visits is strange - to say the least. Nothing like the controlled and direct Evil Cooper that we saw prior to his incarceration. When Good Cooper came thru, a "hit" was arranged to take him out (in the car with Jade), one very likely tied to and arranged by Evil Coop. The "hit" has failed and now two Coopers exist in the real world. The fact that both exist seems to be causing problems. There is a NEED for only one of them to exist - and the one-armed man said one of them must die. 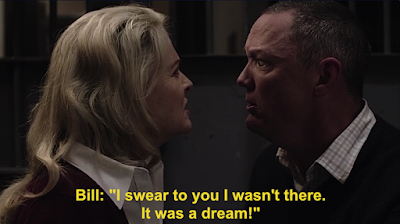 This Buckhorn murder is the murder that Bill Hastings has been implicated in - via his prints at the scene. Ruth Davenport's apt. it's her head that was found at the scene. Bill claims he wasn't there physically, but dreamed that he was. Evil Coop shot Hastings' wife (she appeared to know him) and he is seeking information tied to Hastings via his secretary. It's incarcerated Ray (he's at the same prison as Evil Coop) that has access to Hastings' secretary. Perhaps, Evil Coop will get the info (co-ordinates) that he wants and then dispose of Ray when he has done so?

We also discover that the (male) body in Buckhorn (the head is Ruth Davenport's) has been identified. However, the identity of this body is classified and guarded by the military.
This potentially takes us into the realms of Briggs and Blue Rose/Blue Book - Briggs was the senior military presence (with Top Secret/classified links) in the original series. In S3 Eps 4 - we're informed by his son Bobby, that years ago, Briggs was killed in a fire - this occurring the day after Cooper (Evil Cooper) had met with him. At least that's what we're told.

Episode 4 - ended with a concerned Cole and Rosenfield, and a mention of the infamous "Blue Rose"

There's something funny/peculiar about Albert, I can't put my finger on it, but there is something going on with him. They way he was when he saw Evil Cooper, something is very off. Taking a call from Jeffries (years ago), and allegedly feeding him information supposedly for Cooper. Info that led to the death of an FBI connection in Columbia.

Posted by Horselover Phat at 13:28