The DUMB UK Electorate - I Told You So.

Now it's MY TIME to gloat. I had to tolerate abuse over my prior thoughts/opinions.
Let's compare with the unfolded/unfolding 'actual' reality.
Just to show you how accurate my UK political forecasting really is.
And all before anything even happens!

From my March 2018 post:
The Tories have NEVER had any intention of leaving the (Soviet style) Marxist EU communist state. That's why Cameron sodded-off immediately after the vote. That's why they installed NWO globalist puppet May as his replacement - to front her BINO (Brexit in name only) complete capitulation. This latest event (Skripal/Russia Novichok) will obviously play into their "EU/UK togetherness" agenda.

Here I mention the actual Leave result as being the mere "beginning" of the battle.
You had Brexit "hard" or "soft" MSM-based mind control soon after  - there was/is no HARD or SOFT.
There was only leave or stay. Exiting = leaving the single market and the customs union, those issues were never a doubt. The sheep bought into the "hard/soft" BS though, just as I'd expect. Typical of the (complicit and criminal) MSM to help in twisting the logic of these (formerly established) issues to suit 1% elite ends.

The UK masses have NEVER been so DUMB - they'd win any Olympic events in respect of dumbing-down!
If the UK had any semblance of intelligence - I wouldn't have just witnessed the wanton destruction of UK PLC over the last few decades - and all underwritten by the dense UK electorate!
Shame on you, UK citizens. Get your goddamn SHIT TOGETHER - you mind bombed fools! :)
I don't call the UK electorate the most "apathetic" and "establishment compliant" for nothing - I say it because it's TRUE.
Only a completely degenerated shit-hole would still have a (sick) Monarchy in 2018.
The Windsor family underpin the entire establishment class in the UK - they are criminals too (see Windsor/Savile).
I don't say this for fun or from just behind a keyboard - I would say all of what I write to their faces.

Corbyn's Marxist Labour have now done a U-turn on Brexit - they want the customs union (OWNED).
It could well be that another General Election scenario develops out of all this mess now. We'll have to see.
What a political shit house the UK really is. Democracy isn't just dead, it's been buried too.

Compare my thoughts - very soon after the Brexit vote . June/July 2016, and compare with what has transpired!
This was all written BEFORE "remainer puppet" May was even installed as Prime Minister... 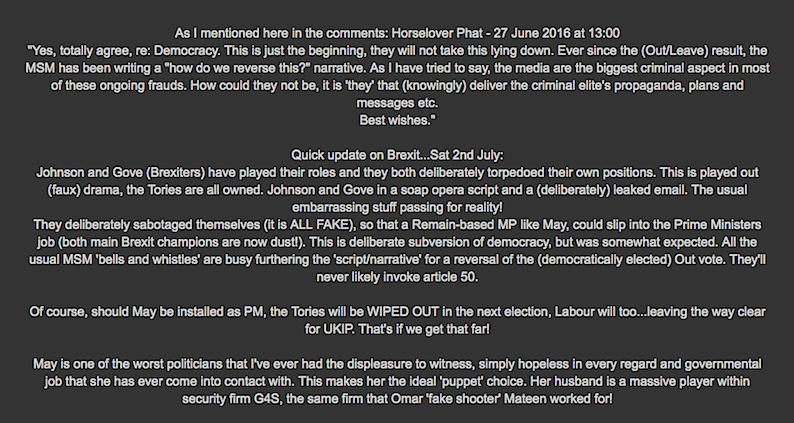 Of course, a few crazy things happened in the interim - the out of the blue General Election, Farage departing etc.
My current belief is that May (or whoever oversees this) will find a way for the UK to both be "out" and "in" - at the same time.
Effectively, you'll be left with the WORST OF BOTH WORLDS. Even worse than BEFORE the EU vote.
That is very likely what will transpire. They WILL NOT stop mass immigration (if you're wondering) - and you can BANK THAT. 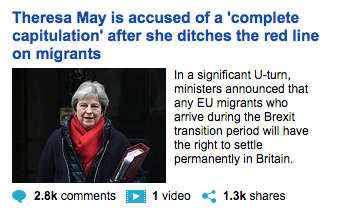 The electorate had the chance to vote for UKIP, (deserting them in 2017) and putting ALL of their faith in the traditional parties instead - Tory and Labour. The same parties that have systematically destroyed the UK for decades. Admittedly, UKIP has been a shadow of its former self, but without that 'anti-EU pressure' the established parties have been able to make hay. Tory supporters have bought in to Remainer May's "Brexit means Brexit" (bullshit), whereas Corbyn's promise to uphold the electorate's wishes has now been "sold out" (see customs union). If Corbyn (and Tory rebels) can force another General Election - there won't be an alternative choice (unless May moves aside). It'll be either Remain-centric Tory (under her) or Remain-centric Labour. There really IS NO LIMIT to the stupidity of the masses - and what luck for our elite controllers. I can't say I'm surprised though, I knew what these loons were like long before any vote scenario. Just as I know what the electorate are like too.

See below. This was before my account was CLOSED by the (Nazi) Daily "1%" Mail.
I was tearing their establishment-based propaganda to shreds (which is easily done), so they SHUT ME DOWN.
65.7% voted TO LEAVE in Stoke-On-Trent. Yet this same (DUMB) constituency elected REMAIN (Marxist) Labour?

There IS NO LIMIT to the electorate's insanity - none whatsoever. I told them it would come back to haunt them - & it has!
Dumb Northern Tories (wtf?) splitting the vote and allowing REMAIN Labour in, scuppering UKIP.
Outsmarted by Labour and the Tories, as usual. Oh look, there's my take on "free movement" too - where's my prize? ;)
The sort of "free movement" that has destroyed indigenous earning power in places like Stoke (cough, cough). 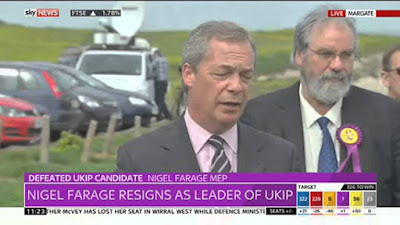 Clearly, Brexit Farage has had a hand to play in the ongoing developments, albeit somewhat indirectly. His UKIP departure (leaving a vacuum, both on the stage and in respect of his party) has helped pave the way for Tory and Labour, both of whom are beholden to the EU. It remains to be seen if Farage will return to the arena, if he does then it's a potential big game changer. If UKIP had still been under Farage (up to this point), I think the electorate that voted "out/leave" would now be flocking to them in their droves. This is why I think that both the electorate and UKIP have scored a bit of an "own goal" over all this (to put it mildly), but it is what it is.

The Daily Fail - spinning yarns about "globalist stooge and REMAINER" May.

Where was the outrage? The sheep just nodded!

"They'll foul up Brexit too." Wow, I'd never have GUESSED.

As PREDICTED and aeons in advance. May IS delivering the WORST of both worlds.

The White Paper. The one designed/overseen by Merkel. Merkel ratified it before any UK politician got to see it!
Will May survive this?

NOW WATCH ON AS THE DUMB UK ELECTORATE SCREAM FOR THE UKIP THAT THEY DESERTED. THEY ALREADY ARE. :)

If you want to see the proof - just pop over to Tory Central - The Daily Fail/Mail.
THEY ARE SEETHING.

Horseloverphat Quote:
"Effectively, you'll be left with the WORST OF BOTH WORLDS. Even worse than BEFORE the EU vote.
That is very likely what will transpire. They WILL NOT stop mass immigration (if you're wondering) - and you can BANK THAT." 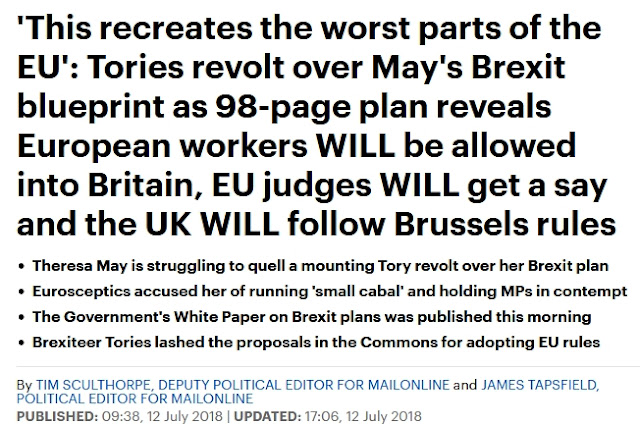 The worst of both worlds, two years pissed away, a basketcase nation, and a bill for circa £40 billion.
There hasn't been a bigger UK political fuck-up than the 2010 (and onward) Tory party.
The worst government ever, and the worst PM in UK history. Hands down, no contest.

I TOLD YOU ALL SO. 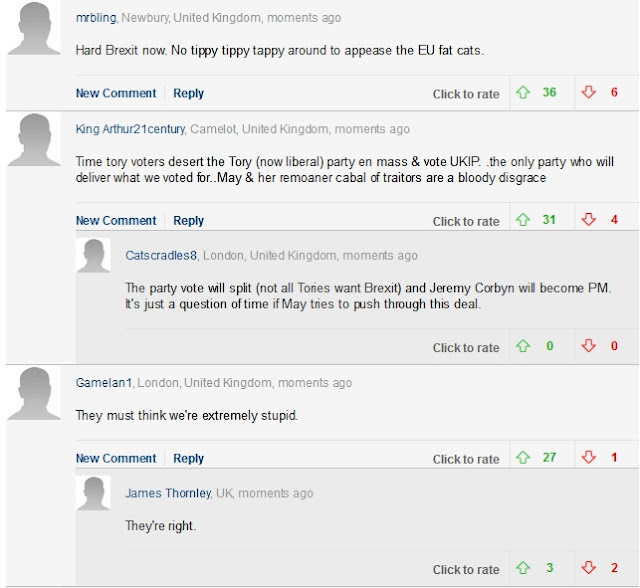 Oh dear. It looks like MILLIONS of people have been played for fools.
The same ones that thought May and the TORIES would deliver. Is there a cure for their insanity?

Trump: "Anyone who challenges their control is deemed a SEXIST, a RACIST, a XENOPHOBE."

The same ones that believed that they DIDN'T NEED (so-called RACIST) UKIP. 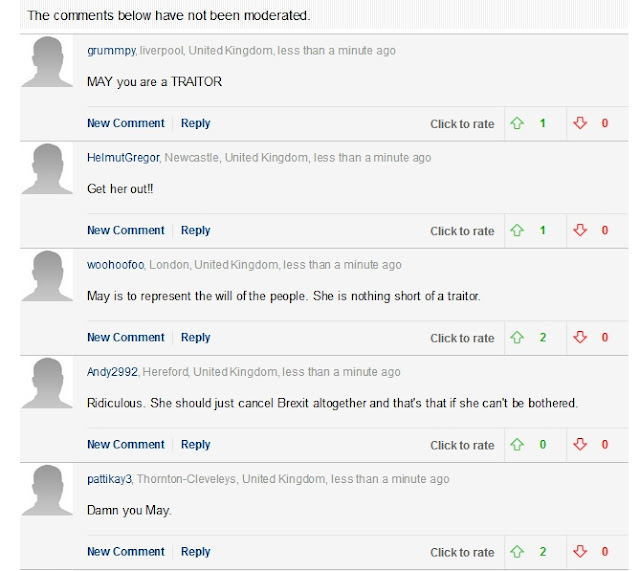 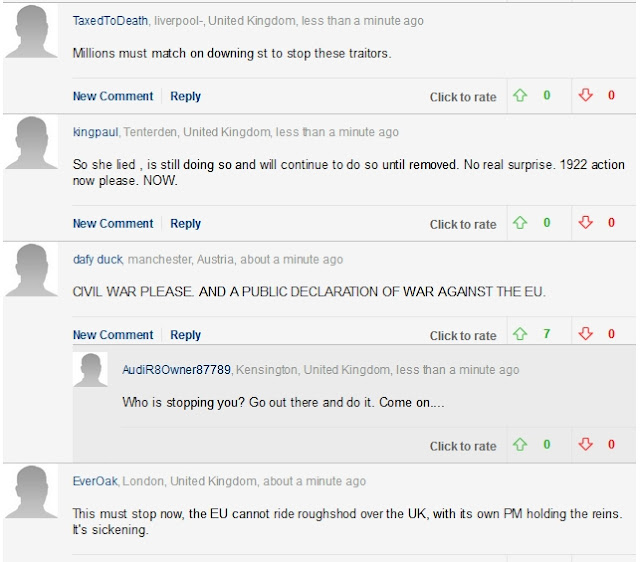 Almost as SAD as the dumb electorate themselves. 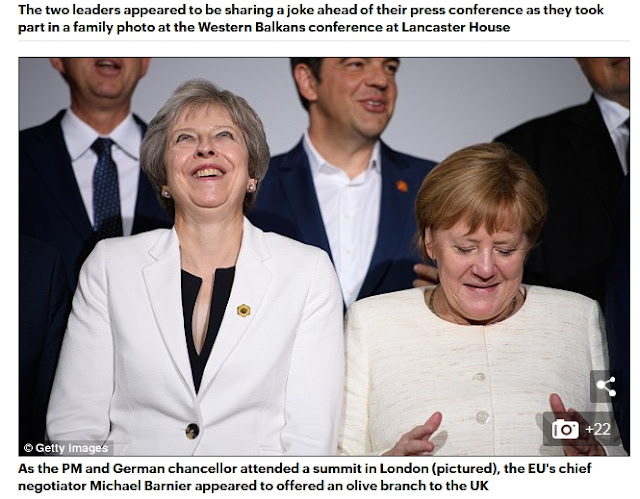 OK, who the fuck voted for this POS? 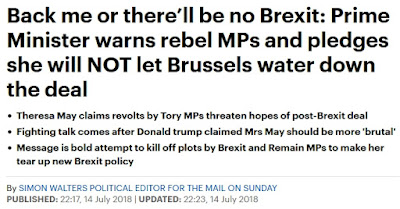 WTF? Threatening everyone if they don't go along with her dictorial an sell-out ways? It's NOT her Brexit!
The ONLY time May grows a set of balls is when she is trying to destroy the UK!
Watered down? Brussels and Herr Merkel designed the fucking deal.
Is this the Tory way of getting destroyed and handing over to Corbyn? So they won't be left holding the baby?

"We can't let Labour in they'll destroy the economy"
(Probably, but that's also exactly what the Tories have been doing! It's has no basis as an argument.
Labour and Tories are BOTH liberal/cultural Marxist and socialists. I did also try and tell you this!)

Seen the size of the national debt - have you?
Seen the decimated infrastructure on the back of mass auterity - have you?
Mass austerity has led to a virtual 3rd World UK for the 99%. And nothing to show for it!
And it is rapidly getting worse. NHS on its knees, joke police, joke military, huge violent crime wave, mass immigration, evaporating public services, low wages, zero hour contracts, mass debt as progress, a criminal Bank of England, PC mind control, LGBT cancer in schools, swathes of programmed and self loathing liberal lefties, inverted racism, etc, etc.

Theresa 'POS' May will be HATED even more than Blair ever was.
As big a CUNT that Blair was, there was a spell during his tenure when things were not too bad. You cannot say that about May (or predecessor Ca-moron). OMG, what a mess!

OK, so I gloated and humuliated the f**k out of you all.
But that is not the ultimate purpose or reason. The purpose is to expose their mechanisms, expose their control, to demonstrate how Mockingbird media owns your thought processes - and how you are manipulated. It's thru my OWN undertsanding of this phenomenon that I was able to accurately project, what would, and has transpired. And so can YOU.

Learn from this. That IS the message.

Posted by Horselover Phat at 17:01